“What if donors filled virtual shipping containers with supplies from local businesses instead of shipping them across the world?”

An aid system in need of aid 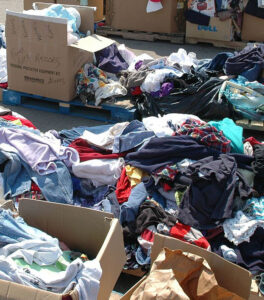 The Help Refugees warehouse outside of Thessaloniki, Greece, is a mammoth space crammed with thousands boxes of donations, sent to help clothe some of the nearly 65,000 refugees still stuck within the country’s borders. The dull task of sorting through mountains of clothing is absolutely essential as volunteers check the quality and suitability of items. A room in the front of the warehouse serves as a reminder of the kinds of items well-intentioned but ill-informed donors have sent: high-heeled shoes, lingerie, women’s tank tops, and tennis rackets.
A similar scene is being replicated across Greece, as thousands of grassroots coordinators of aid contend with soliciting, receiving, and sorting through massive quantities of donations of questionable quality and usefulness for the thousands of refugees in camps. On a recent trip to Greece, groups told us that on average, they discarded about two-thirds of donations.
Lack of funding stymies increased efficiency
Despite growing acknowledgment that grassroots groups are doing some of the most impactful relief work on the ground, international humanitarian funding is not supporting their work, hindering efforts to build systems that could increase efficiencies. Nowhere is this more evident than in the cost and labor it takes to source and deliver supplies. Consider the following:

Also, when donations are shipped in from abroad, local economies miss out on the opportunity to benefit from items being purchased from local businesses.
The very presence of grassroots aid systems provides us with an opportunity to reimagine what a responsive, agile, rapid, and transparent system of humanitarian aid would look like if it were built from the ground up. How might we make it easy for people to get the right supplies delivered to the right place, when they are needed? And how would local economies benefit?
Supporting local economies and refugees Recently, we tested our twin ideas of rapid supply delivery and local investment on the needs-matching platform we are developing at NeedsList. We selected Do Your Part, a disaster response organization working in Oinofyta, Greece, which had identified an urgent need for plastic clogs for all 530 people in the camp.
Terramare, a camping supply company based in Greece offered a discount on bulk purchasing of shoes to donors, and within ten days, all of the shoes had been purchased and sent to Do Your Part. Photos of the shoes on the feet of recipients (pictured above) were shared with donors on social media channels, assuring them that their donations had been put to use. From end-to-end, the process was rapid, transparent, invested in a local business, and driven by real-time needs on the ground–a far cry from traditional models of supply drives.
Now consider the fact that this was a single need in a single camp in Greece. What if donors filled virtual shipping containers with supplies from local businesses instead of shipping them across the world? It’s difficult to underestimate the impact this could have: local businesses would flourish, infusing the local Greek economy with capital. Most importantly, refugee needs would be met much more quickly.
A preliminary survey of aid workers and small NGOs hints at the size of this market: 82 respondents estimated that they had collectively spent over US $1.5 million in the past 18 months in Greece alone, on everything from food and clothing to housing to transportation and much, much, more. With hundreds of grassroots groups and volunteer aid workers operating in Greece, the actual market is likely to be many times that amount.
While large international NGOs will and should remain the largest purchasers and deliverers of these items, it is equally important to create new channels for the thousands of grassroots NGOs across Europe that are increasingly the frontline responders to the refugee crisis.

With over 60,000 refugees languishing in Greece, and with a growing population of refugees and asylum seekers arriving daily, we know that relying on underfunded and outdated systems is not enough. Now more than ever, it’s essential for us to develop new models and systems of rapid, effective, transparent, and efficient humanitarian aid delivery.
The beta of our needs-matching platform will be released later this spring and we invite you to sign up for it by visiting NeedsList.co.

World Refugee Day: What to Know and Do

World Refugee Day: What to Know and Do

Called Back to Roots & Rescue

Called Back to Roots & Rescue